This PMP sample question set was created to assist you in studying more effectively and acclimating to the actual test format. It includes ten challenging practice questions, each with an extensive explanation. With our complimentary PMP practice test, you can begin studying for the exam immediately.

In 2022, the Top Project Manager Qualifications and Career Paths

Reason: The resource management plan is a component of the project management plan; therefore, it is a more accurate answer. Answers C and D are distractor answers.

2. You are mentoring a new, junior project manager and they come to you with the question about the terms quality and grade. They are not quite sure they understand the difference between these two. Which of the following statements is true?

Reason: Quality and grade do not mean the same thing. Quality means the degree to which a set of characteristics meet requirements. Grade is a category that is assigned to goods and services that have the same functional use the different technical characteristics. Low grade is fine as long as quality is high. For example, the McDonald’s quarter pounder with cheese is a high quality, low grade product. Another example would be the Toyota Avalon (high quality, low grade) versus the Lexus ES 350 (high quality, high grade). Both vehicles are made by Toyota.

3. You have just recently taken over as project manager for a small commercial construction project. The previous project manager was not the best at completely documenting all information. Upon reviewing the documentation left to you by the previous project manager, you notice the following graph and it is labeled as the last known update to the project. The graph has no specific numbers assigned to each of the plot points and there is no supporting documentation. Which of the following statements is true based upon this graph? 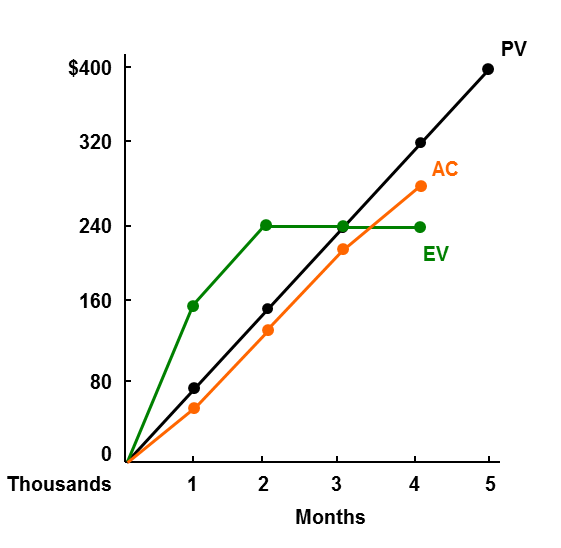 4. You are in the middle of your project and are conducting your tenth project status meeting. At each status meeting you request an update of the current work in progress, the status of any work completed since the last status meeting and a forecast of work is expected to be complete by the next status meeting. One of the team members, recently hired by the company and added to your team, believes that the way you requested updates is not possible, since the work that they do is “highly creative” and hard to measure in order to give the current status. Which of the following methods of measurement for their work would be appropriate in this situation?

Reason: When work elements cannot be easily measured one of the most commonly accepted methods is called the 50/50 rule. This means when the work activity starts, 50% credit towards earned value is achieved. The other 50% is not earned until the activity is complete. Answers B and D would be beneficial when there is a known or fixed work amount and a given amount of time to complete that work. Answer A is an incomplete answer, since there are four types of percent complete.

5. You are a project manager and are currently involved in risk analysis. The team has identified all potential risks, prioritized them based upon their probability of occurrence and their impact to the project if they occurred. You’re now looking at each risk and its impact the overall project objectives. The project sponsor has asked you to provide a contingency reserve figure by the end of the day. Since your organization’s risk attitude is considered risk-neutral, you decide to multiply the probability by the actual impact of each risk. Which of the following techniques have you employed?

Reason: Expected monetary value is the technique of multiplying the probability of each risk occurring by the impact of that risk. For example if a risk as a 50% chance of occurring and would cost $100,000 if it occurred, this means the EMV would be equal to $50,000. You could also employ this same technique for time contingencies. If a risk as a 50% chance of occurring in would cause a schedule delay of two weeks, this means and EMV of one week would be set aside for the schedule contingency.

6. A vendor on your project has just completed their last deliverable. They are asking for payment for the invoice submitted to you. You state that the last deliverable did not meet all the requirements and approach the seller with this information. In the contract, there is a specific term used that means one thing in your industry and in something different in the general use of the term. The seller disputes the claim and you both agree to mediation. Which of the following carries more weight in this contract dispute?

A. Contract wording
B. Signed documents outlining the outcome of contract negotiations
C. The general use of the term
D. The industry use of the term

Reason: Answer A would be incorrect because it is the wording of the contract that is in dispute. Answer B is incorrect because this situation has nothing to do with the outcome of contract negotiations. Answer C is incorrect, because in nearly all instances, the industry use of the term will supersede the general use of a term.

7. You’re managing a new project with an organization that recently dealt with two major disasters on the previous two projects. The first disaster occurred because the requirements were not clear. The second disaster occurred because critical IT servers were not made redundant. When a server disk drive crashed the system went down and caused major delays. The project sponsor has made it clear that they do not expect these types of problems to occur on your project, so it is imperative you consider strategies to manage these two particular risks. You decide to design in redundancy and employ a more stringent requirements gathering technique. Respectively, these two actions would be considered which of the following?

8. You have been given the following information from your project team, and are now ready to develop the project schedule. You have a schedule constraint of finish no later than date 35. Based upon the information in the table below, what is the project float?

Reason: This question requires that you complete a network diagram based on the information in table. The critical path is A-D-E-G-H and has a total duration of 32 days. You have a schedule constraint of finishing no later than date 35, which means you have three days of project float.

A. Doing more activities in parallel
B. Paying a vendor more to deliver a critical path item sooner
C. Reducing some of the project scope
D. Working overtime or adding a second shift

10. You are heading a large international project for your organization. You been informed that this project will be one of the largest virtual teams ever assembled and managed in the history of the organization. You find that you have a project sponsor in a different country along with 25 electrical engineers, three architects plus their staff, two mechanical engineers, and three maintenance experts. In order to ensure the project is done correctly, you schedule weekly meetings over the internet with software that allows the use of cameras. What is your biggest challenge when employing a virtual team?

The most critical step in preparing for the PMP exam is to complete as many practice questions as possible. Our 100% Real PMP Exam Dumps will provide you with additional information about the types and levels of difficulty of the actual exam’s questions. SPOTO PMP Exam Dumps can help you pass on your first attempt.

SPOTO
SPOTO offers products such as cover Cisco, ISC, Amazon AWS, and Other IT Exams. With SPOTO Can Help You Boost Your Salary And Advance Your IT Networking Career Fast.